After establishment of OPEC in 1960, a new era of competition was emerged between world’s two big oil producers, e.i., Iran and Saudi Arabia, and from then,  OPEC’s internal changes and their reflections on the international atmosphere were affected by the intensive competitions arising between OPEC’s two outstanding members Thus, Iran and Saudi Arabia are recognized as two significant and forceful countries in OPEC organization. So, studying and analyzing the behaviors of these two countries in OPEC and global oil market is of great importance. This paper examines Iran-Saudi Arabia behavior in OPEC using monthly data between 1973:1-2015:12. To this end, estimations were initially developed using Griffin’s linear model, then they were conducted using Markov Switching’s method with fixed transition probability. Results of the fixed transition probability indicated that Iran-Saudi Arabia behavior was nonlinear and a collusion regime is applied for Iran’s behavior while a competitive regime is applied for Saudi Arabia’s one. In other words, during the research period, Iran’s behavior in OPEC has often been in complianc and competent with other members and based on the agreement, collusion and Cartel’s rules, yet Saudi Arabia’s behavior has been against Cartel’s rules  and it was based on competition. Moreover, findings indicated that the length of remaining of Iran in the collusion regime was approximately 217 months and that  in the competitive regime was approximately 13 months. Anyway, Saudi Arabia stayed approximately 40 and 68 months in the collusion regime and competitive one, respectively. As a result, in this research period, the probability of Iran’s staying in the Collusion regime is far more from its staying probability in the competitive regime. Yet, the probability of Saudi Arabia’s staying in the competitive regime is more than its staying  in the collusion regime. 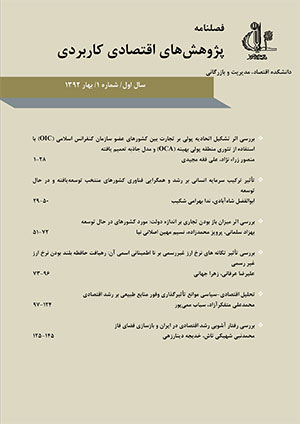